Bemoaning government ineptitude is a popular pastime. There are times when it feels justified, but usually it just reveals our lack of understanding on how government works.

“Where are the public sector Foursquares and Twitters?” we ask. “Why hasn’t anyone developed a Kickstarter for government?”

The way the public sector is structured hugely constrains government’s ability to do so.

The Issue: Government is Designed to Avoid Risk

“[In the private sector,] venture capital provides a dynamic and readily available source of funding to seed innovative initiatives,” explains management professor Sanford Borins, “while compensation through share ownership enables startup firms, their investors, their employees and, increasingly, their suppliers to reap large financial rewards from this activity.”

Compare this with the public sector where funding comes from legislative appropriations, civil servants don’t receive equity, and bonuses are comparatively tiny. Also in the public sector, the costs of failure—so often hailed by the private sector as a necessary step towards success—are unbearable. In a cutthroat political climate and unforgiving media culture, one misstep can end a career.

In short: the carrots are non-existent and the sticks are omnipresent. Put in their shoes, would you be able to ‘innovate’?

“We need to recognize the constraints that [civil servants] face and the culture that has been drilled into them: Minimize risks. A procurement officer’s job is to dot i’s and cross t’s,” said Clay Johnson of The Department of Better Technology at FOCAS. “Government is risk-averse for good reason. We’ve given it the responsibility of protecting taxpayers’ dollars.”

Despite the norms of conservatism, there are ways to enable new ways of thinking and doing. To do so, we must first understand how each government culture works. Just like with “citizens” and “communities”, “government” is not homogenous either.

The Boston Mayor’s Office of New Urban Mechanics, recognized to be among the most innovative city governments in the United States, is a unique case. Susan Crawford recently studied the Office to try and dissect what made it so successful.

The secret sauce: leadership and people.

In an era where governments are eager to embrace the latest civic app, Boston Mayor Tom Menino favored human touch over high tech. He long refused to permit voicemail use in City Hall, because he didn’t want Bostonians to get an automatic response when they called. He opted out of adopting the standard, three-digit “311” number for his city services hotline—instead staying with the ten-digit 617-635-4500—because “311 sounded too bureaucratic…faceless.”

But each government institution has its own personalities, dynamics, and idiosyncrasies. What works in one place may not work in another. FOCAS participant Story Bellows of the Philadelphia Mayor’s Office of New Urban Mechanics said her Office only gained credibility among other city agencies when it was selected a winner in the Bloomberg Philanthropies Mayors Challenge. While it had always had the support of the mayor, the internal institutional validation that was needed to get other agencies engaged only came with this badge of external recognition.

“Buy-in at the top was necessary but insufficient,” said Bellows. “Given the risks associated with doing things differently, we needed external validation of our ideas.”

Of course, not all cities are lucky enough to have Offices of New Urban Mechanics or Chief Innovation Officers. Some cities, as Caitria O’Neill of Recovers.org reminded us at FOCAS, only have Earl the Webmaster. And even if Earl had the time and technical skills, what would be his incentive to try and “open” his local government.

“In small communities, nothing hinders them from implementing open data,” said O’Neill, “but nothing encourages them or facilitates it either.”

At FOCAS, John Bracken of the Knight Foundation noted that several participants were “insider/outsiders”. These are individuals who had worked in government but were now outside, or former corporate or non-profit types that had recently joined government. He encouraged the group to use these unique perspectives to understand how we can enable government innovation. But given the diversity of institutional environments, political will, and resource availability, perhaps we should stop trying to create the perfect conditions for innovation. Rather, perhaps we should empower individuals within government to shape their environments to be more conducive to innovation.

“We haven’t yet had a conscious effort toward helping those working on the inside,” he observed. “How can we find mid-level managers and highlight their work? Can we help accelerate what they are doing by providing support and activating our and their networks?”

With these thoughts, the Government Innovator Cohorts concept was born. The program would support civil servants with a track record in driving public sector innovation. Ideally, fellows would be long-term civil servants that have both executive visibility and operational resources. Short-term political appointees would not be eligible, as they are typically installed to implement a new policy or mandate, and therefore likely to already have high-level support and ready resources.

Selected fellows would be giving skills training in technical (e.g. how to design effective programs), institutional (e.g. how to gain political cover), and managerial (e.g. how to implement public sector change) areas. The curriculum, however, while useful, may not be the key benefit of the Cohort program.

Several FOCAS participants had participated in similar programs. Andrea Saenz of Chicago Public Library is a Broad Residency alum and Jessica Lord of Github and Max Ogden are both former Code for America fellows. All confirmed that the greatest value of their respective fellowship programs was the peer support networks they gained. As Cohort fellows continue in their public service careers, having a network of like-minded peers with whom they can brainstorm, celebrate, and commiserate could be invaluable.

Many open government initiatives are driven by empowered citizens and civil society. This, in itself, is not a bad thing. But there is often an implicit negative bias against government in these initiatives.

In Dave Eggers’ “The Circle”, the main character, Mae, creates Demoxie, a platform where critical society questions are decided by citizen votes. She reflects on her creation: “[Mae] thought of that painting of the Constitutional Convention, all those men in powdered wigs and waistcoats, standing stiffly, all of them wealthy white men who were only passably interested in representing their fellow humans. They were purveyors of an innately flawed kind of democracy, where only the wealthy were elected, where their voices were heard loudest, where they passed their seats in Congress to whatever similarly entitled person they deemed appropriate. There had been some incremental improvements in the system since then, maybe, but Demoxie would explode it all. Demoxie was purer, was the only chance at direct democracy the world had ever known.”

In democratic societies, citizens select leaders for their vision and their perceived ability to implement those visions. In electing these leaders, citizens also entrust them to act in their best interest over the course of their term. Open government initiatives have the potential to displace a leader’s medium- and long-term plans for the needs of a loud and organized few.

In Uganda, the monitoring of elected community leaders has shown mixed results. On the one hand, some monitoring incentivizes leaders to work harder for their constituents. Too much, however, and competent, effective leaders quit.

As we work toward equitable, accountable governance, we need to balance between demanding transparency and participation and allowing our governments to do what we elected them to do. And we need to ensure our push for “open government” does not lead us down a path where competent leaders with technical expertise and long-term vision are upended by the immediate whims and desires of a small, elite faction. Otherwise, we’re right back to the image of the Constitutional Convention described by Eggers’ protagonist. 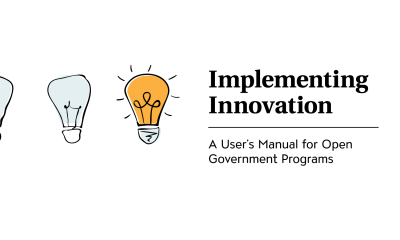